Chelsea’s signing of Lauren James from Manchester United for a fee rumoured to be £50,000 has been suggested by some to be a purchase that’s been made just because Chelsea can afford to, not because they necessarily need to.

While there’s some merit to that argument, Chelsea already boast an attacking line up of Sam Kerr, Pernille Harder, Fran Kirby, Bethany England, Guro Reiten and Erin Cuthbert, and not all of these can play every game. James possesses a unique skillset compared to her team mates. Rather than just taking up another place in the squad, she can supplement what we already have at our disposal.

The 19-year-old has strength, explosive power, pace and bundles of skill, which enables her not just to beat defenders in behind, but also by dribbling past them or picking the ball up in tight areas. For Manchester United, she was used as a number 10 and primarly as a wide player in a 4-2-3-1 formation, and it’s here in which Chelsea can utilise her to help raise the levels of her team mates. In a similar way, Pernille Harder helped to raise the levels of Sam Kerr and Fran Kirby, when the trident first started playing together last season.

Her threat in behind off the left hand side, coupled with the threat of Kerr through the middle and Kirby on the right will force opposition defences to drop deep to stop a regular Chelsea ploy of using their centre backs Millie Bright and Magda Eriksson to bypass the midfield and play long passes over the defence for the attackers to run onto.

Two examples of that are a goal by Bethany England two years ago from an incredible pass by Millie Bright. The next one from last season against Tottenham Hotspur, where Bright’s pass to Reiten on the left is put home by Kerr (around 2:00 mark).

Oppositions coaches will look at this and be wary of that Chelsea threat. While that move might be something we can do once a game, Chelsea will need to find new ways to get in behind, and this is where Harder could become even more crucial to our attack.

The Dane arrived at Kingsmeadow with a hefty price tag, her £300,000 fee made her the most expensive player in the history of women’s football.. Whilst this isn’t down to the player, it perhaps can lead some to feel that she should be the best player on the pitch every game and be able to, in her own words, “expect that I will dribble past a whole team and score a goal because I’m the most expensive female football player”.

And that’s not saying Harder did not have a good season, she scored 16 goals and provided 5 assists in all competitions, according to WyScout. Her experience and talent was crucial in Chelsea’s run to the Champions League final. But there is a sense that more is still to come from Harder, and the signing of James can enable Chelsea to play in a way that enables to show case the very best of her ability.

Her two best WSL performances came whilst playing as a “free 10” (in the 3-0 wins at home to Arsenal and away to Everton) and switching to a 4-2-3-1 can enable her to take up this role and influence play all over the pitch, and crucially, in areas to directly influence the result of the game.

Mia Eriksson, a Swedish photographer and women’s football journalist (who also wrote this piece on Pernille’s first three months at Chelsea for the Chelsea Social) has followed Pernille’s career since her days at Linkoping and it was during Harder’s time there that she started to play as a number 10.

“It was under Martin Sjögren in 2015/2016 that Harder’s role began to change” Eriksson told me. “He became the first manager in the Swedish league to move away from a direct 4-4-2 and into a 4-2-3-1 system where they tried to build from the back and find Harder who’d be operating in spelyta (zone) 2 behind the strikers.

“Her role here was to not just assist the strikers but also the wingers and of course, score herself. Linköping’s had many ways and strategies to get to zone 2, but their main thing was that they always tried to free Harder and make space for her to act there.” 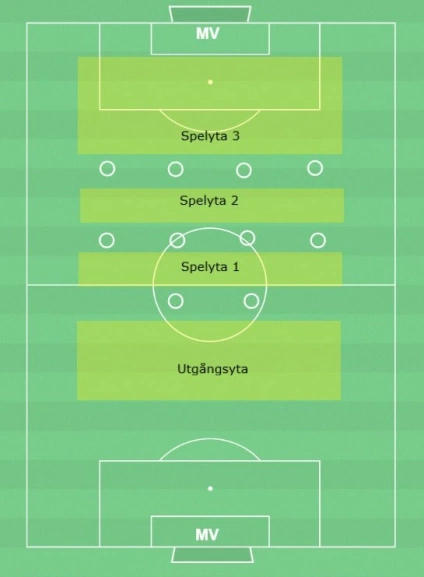 “There are so small differences between a player like [Fran] Kirby and Harder that they easily could play the same role. Not just the fact that they are both great footballers to assist from this area, but they also are similar to when it comes to expected goals from open play, looking back over the past two seasons.

“Both are great at carrying the ball forward but Harder’s numbers, according to TransferLab, in dribbling, line-breaking passes and through balls per 90 are slightly better.

“It all depends on what role and position they play, it’s hard to explain, but as a striker Harder has better numbers overall, but as a winger, it’s Kirby. As an attacking playmaker – nothing separates them.

“It’s all about how you want to play. But why we haven’t seen the “best” of Harder is in fact the formation and the players in it. Another ‘problem’ also, is that Kirby has had one great season now, Harder has had several in a row.”

“Look at the first goal vs Arsenal when they won 3-0. Perfect example from how Martin Sjögren wanted to use and did use Harder in Linköping. The main concept is that the way Chelsea played had almost nothing to do with zone 2 and more about high press and direct play. Chelsea played more football without the ball last season than with it. Pernille Harder is a footballer you want to use when playing football WITH the ball.”

As Mia said, Harder is a player you want to use when you’re playing with the ball, not playing counter attacking reactive football, yes Harder is still effective, but in order to maximise her abilities and talent on the ball, you need to play in, not just a formation, but also with a set of principles and philosophies that say to Harder, roam around this zone on the pitch, we’ll get you the ball and then you make your magic.

Having James and Kirby either side of her and Kerr ahead of her will mean that teams will simply be unable to crowd her out or even focus on 1 v 1 defending against her because of the threats that they all offer. Adding James to make our attack a quadrant could be key for Emma Hayes deciding to move away from the direct style they employed last season.

Of course this is just one example of how Chelsea could line up this season, they of course reverted to a 4-4-2 diamond for the majority of their Champions League run last season, have played 4-3-3 and now Aniek Nouwen has signed could easily switch to a 3-5-2 formation (in which James could still feature as a wing back).

But especially domestically, Chelsea have the personnel to be dominant, to force their game plan upon their opponent, to use as much attacking firepower as they possibly can.

And will Sam Kerr, Fran Kirby and Lauren James might get the headlines and the focus, it’ll be Pernille Harder that will prove most influential to this Chelsea team.